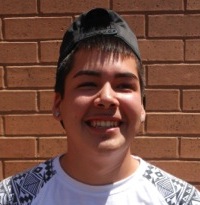 Noe Torres is a 17 year old sophomore at Kelly High School and a Math Literacy Worker in Chicago, IL.

Noe joined YPP during the first YPP Chicago session. He has remained committed to YPP’s work since the summer of 2014. Aside from his passion for graffiti artwork, Noe greatly enjoys mentoring kids. One of Noe’s greatest accomplishments was gaining patience. He learned how to implement fun attention getters and he learned to work with outspoken peers very effectively. Noe’s amicable personality brings positivity into the space.

Noe aspires to become a math teacher in the future. He shares: “YPP has influenced my future plans because now I want to go to college and I am thinking about becoming a teacher. YPP influenced me because of how they teach us how to work with children. Working with children throughout being in YPP influenced me on becoming a teacher because it made me realize that I enjoy working with children. Another thing that I got from being in YPP was one of the mentors said they would help all through high school so I can get into college. YPP has influenced a great amount with me going to college.”

He also shares how YPP helped him with public speaking: “I think that one of the great things that I do is that I explain things thoroughly. I am an outgoing person and am now never afraid to take on an audience or meet new people. YPP has helped me accomplish this. This is why I keep coming back.”

Noe’s creativity and positive attitude does not go unrecognized. He is expected to present in a professional conference center located in St. Charles, IL called iMATHinaNon in May 2016. The presentation encompasses sharing YPP’s curriculum and the benefits of near-peer mentoring. This presentation will hold an audience of about 30 high school teachers.