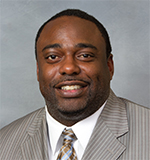 Marcus Brandon grew up in a nurturing, supportive and religious family in Guilford County. They taught him to value a strong community and the significance of faith in daily life. His family also helped him understand the importance of second chances and gave him the unconditional love necessary to overcome adversity.

Upon graduation, Marcus was accepted to the North Carolina A&T University. In college, he caught the political bug and became active in Democratic politics. After college, he left Guilford County to work on campaigns around the country. Since then, Marcus has taken the skills he learned as finance director on political campaigns to help non-profit organizations with their financial development.

Marcus came home to Guilford County in 2009 and in 2010 ran and won a seat in the North Carolina House of Representatives. In the legislature, Marcus distinguished himself early. He built bridges across the aisle and became a leader in the fight for education reforms. He also led the effort to offer second chances to ex-offenders because Marcus understands that people who make mistakes can become productive citizens, instead of repeat offenders. At the end of his first term, Marcus was recognized by organizations like the State Employees Association of North Carolina, Democrats for Education Reform, Parents for Educational Freedom and the Black Alliance for Education.

Marcus is currently serving his second term in the legislature where he has gained a reputation for working with people of all political persuasions to get results for the people he serves. He wants to take his work ethic and values to fight for the people of North Carolina’s 12th Congressional District in the U. S. House of Representatives.