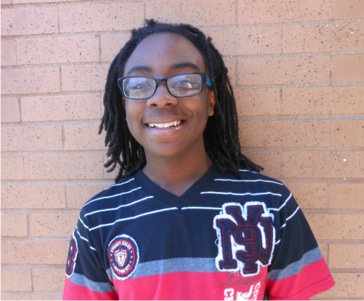 Corey Thomas is a 15 year old freshman at North-Grand High School and a Math Literacy Worker in Chicago, IL.

Corey came into YPP during the 2015 summer session and has remained committed to YPP for three consecutive sessions. Corey has shown great growth since his first YPP session. He was very shy and kept his great ideas to himself. Corey now speaks confidently and assertively. He developed many leadership skills throughout the program. He can take control of a noisy room and productively demand the attention of his peers. Corey is very easy to get along with because he has such a positive outlook on life.

Corey can personally account for all of the positive lessons YPP has provided him: “I feel being in YPP has improved my life because I'm now financially responsible and mentally responsible. I've grown up while being in the program. I now know what I want to do with my life, my future. I now have dreams that I know one day I will achieve. Being in YPP is like having new teachers. When I was in elementary school I had teachers that didn't teach me anything. I'm actually surprised that I graduated. Now I'm a freshman in high school with a B in Algebra and it's all because of YPP. If I had to recommend a person to join this person I most definitely would because this program is a lifesaver.”

“YPP influenced my future goals/plans because I now have the confidence to do what I want to do with my future. I want to aSend Depaul University. I want to became a doctor and a chef part Nme. I thank the YPP program. I learned to be responsible. I've grown up during the fall season. I have goals that I plan to achieve and I believe that YPP is getting me started on the right path. YPP has been a lifesaver. My biggest goal was to find a program that accepts you for you and I found that in YPP. Thank you YPP”