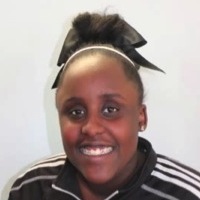 Ashanti Willis is a 16 year old sophomore at Collins Academy High School and a Math Literacy Worker in Chicago, IL.

Ashanti joined YPP during the first YPP Chicago session. She has remained commiSed to YPP’s work since the summer of 2014. If AshanN could be described in one word it would be “leader.” Ashanti is excepNonally mature for her age. Aside from her professional demeanor, she is also very welcoming. Ashanti thinks outside the box; she developed math games (Math Feud, Truth or Math) that are now part of the YPP curriculum.

Ashanti shares a positive experience: “Being involved with YPP makes me feel like I can actually have the courage to help kids when they need it and not think that kids don’t want the help. On one occasion I had to facilitate a math game and I was completely oblivious to the fact that I was nervous and I explained the game, helped out and it was actually great because I thought that I couldn’t do it. It made me feel good about myself and actually care more about the program.”

Ashanti aspires to be a cardiologist in the future.