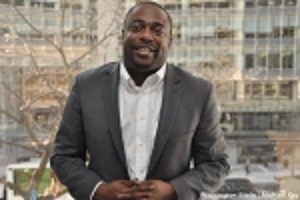 Brandon will likely draw on that experience in his new position as executive director of North CarolinaCAN, a nonprofit education policy and advocacy organization.

He started that job this week. Before that, Brandon spent two years as the state representative for District 60. He did not seek re-election.

Brandon said he wanted an avenue to be able to talk about public schools. He said he also wants to work on “common sense ways to deal with disparities.”

The organization on Wednesday also released a report that illustrates achievement disparities in public schools.

For example, North Carolina black and Native American fourth-graders had lower performance than their peers in reading and math on the National Assessment of Educational Progress, also known as the Nation’s Report Card. The NAEP proficiency rate for economically disadvantaged fourth-grade students was 16 percentage points lower than the rate for students from wealthier families.

Those trends also held true on NAEP for eight-graders and for all students on the North Carolina standardized tests.

The trends are not changing, Brandon said. “These gaps are not closing."

The report lays the foundation for his goals with CarolinaCAN, Brandon said.

This year, he said, CarolinaCAN will focus on teacher pay, financial literacy and open enrollment – allowing students to attend the public school of their choice instead of restricting them to attendance zones.

Brandon, a Democrat, said that despite his recent past as a politician, the organization’s work is not driven by politics.
Political rhetoric “is killing education,” he said.

There should be more “common sense conversations about common sense policies” to reduce disparities and improve education for all North Carolina students, Brandon said.

In a statement from CarolinaCAN, Brandon said his new position is an opportunity to continue advocating for children.

“We are committed to the advancement of common sense solutions that will provide a high quality sustainable education for all the children in the state of North Carolina regardless of their background or socioeconomic status,” he said.

CarolinaCAN, started in 2013, is a branch of 50CAN: The 50-State Campaign for Achievement Now.