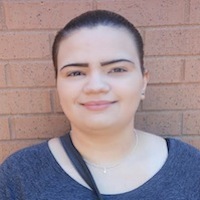 Chloe Stoller is a 16 year old junior at Lincoln Park High School and a Math Literacy Worker in Chicago, IL.

Chloe joined YPP during the first YPP Chicago session. She has remained commiSed to YPP’s work since the summer of 2014. Chloe is a self-starter and does not procrasNnate in YPP. She goes out of her way to help and leads by example. She always seeks posiNve opportuniNes and takes advantage of guest speaker workshops by networking. Chloe was promoted to YPP Ambassador aRer showing consistent growth and appreciaNon of YPP’S mission and vision. As of the fall 2015 session, responsibilities include speaking on behalf of her group based on interactions and observations of her peers and promoting YPP throughout the North Lawndale community.

Aside from her mature and professional demeanor, Chloe can transition to working with children very quickly. She shares an memorable experience, “It made me feel good that when I reached out to a student the student reached back out to me.”

Chloe expresses how YPP put her on the right track: “When I first started The Young People's Project program I didn't have much plans for the future. On my first summer at YPP I wasn't doing the best in high school. I feared going to my senior year and didn't feel ready. After two and a half years I want to be so much more. My future goals / plans are now going on to community college at Harold Washington and later transfer to DePaul to study as a motivational speaker."